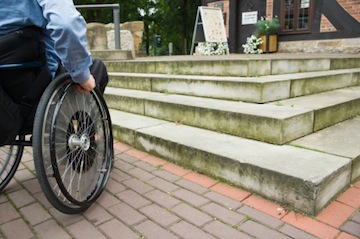 “[H]arassment focuses on situations in which the social environment of the workplace becomes intolerable because the harassment (whether verbal, physical, or visual) communicates an offensive message to the harassed employee.” Roby v. McKesson Corp. (2009) 47 Cal.4th 686, 706.

To establish a claim of physical disability harassment, the plaintiff must show:

Judicial Council of California Civil Jury Instructions (CACI) No. 2521A.

Harassment is normally a separate cause of action from discrimination. However, harassment is actionable as "discrimination" if it is "so severe or pervasive as to alter the conditions of [the victim's] employment and create an abusive working environment." Clark County School District v. Breeden (2001) 532 U.S. 268, 270.

Employers are strictly liable for harassment by the employee's direct supervisor carried out in the scope of his or her duties. However, for coworkers, the employer is only liable if the employer knew or should have known of the ongoing harassment and then failed to take immediate corrective action. California Government Code section 12940(j)(1).

A physical disability is "[a]ny physiological disease, disorder, condition, cosmetic disfigurement, or anatomical loss that does both of the following:

What Qualifies as a Physical Disability?

Physical disability includes but is not limited to:

What Does Not Qualify as a Physical Disability

Physical disability "does not include sexual behavior disorders, compulsive gambling, kleptomania, pyromania, or psychoactive substance use disorders resulting from the current unlawful use of controlled substances or other drugs." California Government Code section 12926(m)(6). Physical disability also does not include “conditions that are mild, which do not limit a major life activity . . . such as the common cold; seasonal or common influenza; minor cuts, sprains, muscle aches, soreness, bruises, or abrasions; non-migraine headaches, and minor and non-chronic gastrointestinal disorders.” California Code of Regulations, title 2, section 11065(d)(9).

An Example of Disability Harassment

In July 1994, Caldera began working as a correctional officer. Caldera was later transferred to an Administrative Segregation (Ad Seg) unit, an area where inmates with disciplinary issues or mental health needs are housed. Caldera stutters when he speaks. Both Caldera and Sergeant Grove worked in the Ad Seg unit. However, they mainly worked in different halls within the Ad Seg unit.

Caldera then filed a case in court. A jury found that Caldera was subjected to unwanted harassment based on his disability; the harassment was severe and pervasive; a reasonable person in Caldera’s position would have considered the work environment to be hostile or abusive; a supervisor participated in, assisted, or encouraged the harassing conduct; the harassing conduct was a substantial factor in causing Caldera’s harm; the employer failed to take all reasonable steps to prevent the harassment; and the employer’s failure to prevent the harassment was a substantial factor in causing Caldera harm. A jury found that Caldera was entitled to $500,000 in noneconomic damages. The Court of Appeal of the State of California, Fourth District, Division 3 affirmed the jury verdict.

If you are experiencing harassment due to a disability, or if you believe that your rights have otherwise been violated by your employer or ex-employer, call the experienced employment law attorneys at Kokozian Law Firm, APC or Contact Us via our online form.