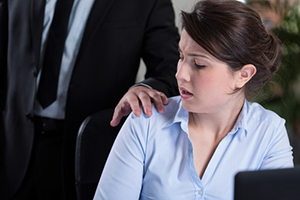 Under both federal and state laws, a lawsuit needs to be filed prior to the statute of limitations expiring, and before a lawsuit can be filed, you need to exhaust your administrative remedies. The first step is to file either with the California Department of Fair Employment and Housing (DFEH) or with the Equal Employment Opportunity Commission (EEOC). You have three years from the last instance of sexual harassment to file with the DFEH. A sexual harassment attorney in Los Angeles can guide you through this process.

FEHA offers broad protections for job applicants and employees. It prohibits harassment based on protected characteristics, including sex. Harassment is prohibited in workplaces of all sizes. Workplace harassment can take the form of quid pro quo sexual harassment or hostile work environment harassment, or share traits with both.

To show that you were victimized by quid pro quo harassment, you would need to show that you applied for a job with or worked for the defendant, a supervisor, manager, or other agent of the defendant made unwelcome sexual advances toward you, your job or some aspect of it was made contingent on submitting to sexual advances, you were harmed by the harassment, and the supervisor or manager’s actions were a substantial factor in causing the harm.

You can show hostile work environment harassment by establishing that you received unwelcome comments, actions, or advances, these were motivated by your sex, and the harassment was pervasive or severe enough to change the conditions of your employment. The sexual harassment needs to be more than occasional or trivial to be considered actionable.

Our Los Angeles sexual harassment attorneys also can help you bring a claim under Title VII. The federal law applies to employers with at least 15 employees. As under California law, harassment can include not only actions motivated by sexual desire but also offensive comments about a sex. Harassment is unlawful when it generates a hostile work environment, or when it leads to an adverse employment decision, such as termination. The harasser can be a supervisor, manager, coworker, customer, or client. In general, it is easier to hold an employer accountable for a supervisor or manager’s sexual harassment than it is to hold it accountable for harassment by a coworker, customer, or client.

Damages under federal law may be capped. They are not capped under FEHA. In California, if you can establish liability for sexual harassment, you may be entitled to compensation for back pay, front pay, mental anguish, and loss of reputation. If an employer’s conduct was egregious, it may be possible to obtain punitive damages.

Consult a Sexual Harassment Lawyer in Los Angeles or Beyond

Sexual harassment can be very damaging, both economically and emotionally. If you faced workplace sexual harassment in California, you should talk about the viability of a legal claim with the experienced attorneys at the Kokozian Law Firm. Call us at 323.857.5900 or contact us via our online form.